As Madonna heads off on her Rebel Heart Tour, we take a look at everything that went on on stage

And as she performed at Montreal for the opening night of her Rebel Heart tour, it was clear to see that her live performances are just iconic now as they were back in the day when she first started out and was breaking down all the boundaries.

With a red and black theme invading the stage, Madonna had everything from warrior-esque dancers to spears jousting about on stage with her.

Oh, and a cage. Let’s not forget that she was in a cage at one point. 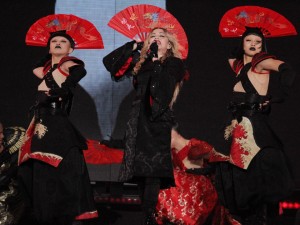 Madonna certainly seemed like a FAN of the oriental vibes – sorry, couldn’t resist – and her wardrobe even reflected this as she wore a red kimono, complete with an obi belt.

She put down her red fan and whipped off the kimono though when it got down to the nitty gritty and really rocked out. This is exactly we look like when we used to play on Guitar Hero (remember that?)

This all has a feel of Like a Prayer about it. You know. When Madonna was singing in a church and she had flaming crosses behind her?

The worldwide tour is in support of her thirteenth studio album, Rebel Heart, which was released earlier this year in March.

It included the single Bitch I’m Madonna, which the music video for it was like a who’s who of the world of celebrities. Everyone from Rita Ora and Beyonce, to Kanye West and Miley Cyrus made an appearance in it, even if brief.

With this just being the start of Madonna’s Rebel Heart tour, it looks like there’s no sign of her slowing down any time soon at the age of 57.

We mean, we’re pretty knackered just watching her on stage!