When I was 26, I felt stuck. My office job of three years had collapsed, and in the midst of unemployment I began to ask myself if it was even still possible to become what I had intended to be all my life: a singer. My dream, though, had grown too nerve-shredding to actively pursue. Every time I started to hustle together an album or market myself to a scout, I felt empty and alienated. My frustration stemmed from my utopian ideal of what being a singer could mean: being a pure vessel for music, sharing holy moments between human beings. How do you get paid to do something like that?

Then one night the solution appeared. I picked up a guitar at a friend’s house, singing softly as he napped beside me on the couch. “Man,” he said after a few minutes. “I’d pay you to sing me to sleep any night.”

His statement triggered memories of similar comments friends had made over the years. Once, a friend had confided to me “I wish your voice could be the last thing I hear before I die.” Perhaps I was a natural soother. I apparently had a talent for a very specific kind of singing, and now I needed to take it more seriously. I felt like a samurai accepting my role as a warrior.

I also realized it was a brilliant business idea: I could be a professional lullabyist. I wanted men and women to pay me to sing them to sleep. Is that a thing? Of course it’s not a thing. I was definitely the first and probably the last of my kind. But I truly thought it could be my thing. 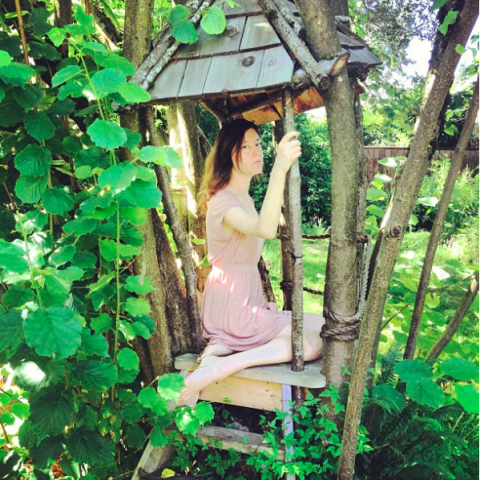 For starters, I fit the bill: I have the look of someone punished by Athena to live in the trunk of a tree. In other words, I’m a pale, fragile, and soft-spoken lady with eastern European features—which is to say, I look natural with a shawl wrapped around my head. The concept had a timelessness to it: a lullabyist sounded like the practitioner of an ancient profession, someone trained in the art of hypnosis, music, and magic; someone who only emerged, like a vampire, at dusk, drifting from house to house like a sad, sweet spirit. Once I was a lullabyist, I would be professionally ephemeral.

Everyone who moves to Los Angeles abandons their family, friends, and a chance at a stable career just so they can have strange things happen to them. Now, I could be that strange thing.

As a native Los Angeleno, I knew my new career trajectory would get quite a bit of traction. Everyone who moves to Los Angeles abandons their family, friends, and a chance at a stable career just so they can have strange things happen to them. Now, I could be that strange thing. I wouldn’t have to post on Facebook. I wouldn’t have to leave flyers in coffee shops. I would just have to tell people I met what I did for a living and the magic would do the rest.

And I was right. I never had to advertise beyond word of mouth. I walked into parties, bars, venues, and clubs, mentioned my new profession, and immediately got interested clients (and outspoken detractors). I told people I charged upwards of $150 per hour, working one to three hours a night, including travel time. In those moments I felt like I was skydiving. It was exciting and terrifying to have discovered a wholly original idea that didn’t, at least then, seem to have a downside.

I spread the word around Hollywood until I had a little collection of potential clients. Now all I had to do was go through with it. It scared me, but I told myself that it didn’t matter that singing someone to sleep so clearly wandered along some problematic boundary between one’s personal and professional life, both of which, in my case, were sorely lacking. This idea made me feel alive, and I was going to do it.

I had Sam, my first client, fill out a consent form and an intake questionnaire (sample question: “Do you want me to sing a song written specifically for you?”), and we talked about how I would get in and out of his house ahead of time. 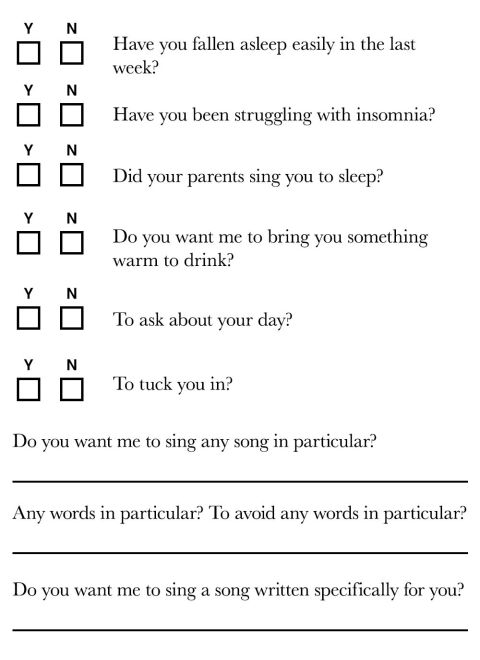 As I left my house that night carrying a guitar, a purse, and a canister of hot tea, I felt less like the mythical creature I’d envisioned and more like a fragile animal, a deer carrying loads intended for a donkey. Sam, an attractive director and editor, met me at the door wearing pajamas that he’d bought especially for the occasion. I asked him if he’d brushed his teeth, meaning it as a joke, but it hung between us awkwardly like a strange reprimand.

I felt ridiculous. What am I doing?

Walking down the hall to Sam’s bedroom, I felt ridiculous. What am I doing? Even though I trusted Sam, everything felt incredibly charged: the air, the walls, even Sam himself. I was entering the most vulnerable part of Sam’s home. Things were about to get very intimate, which somehow, during my escapist daydreams of my fantasy profession, I had not foreseen, or maybe I had been in complete denial.

Sam got into bed and I sat down cross-legged over his covers. I thought about how I had not been in a bed with someone else in a very long time. I asked him about his day (he had requested this service on his intake form), and he shared his work frustrations and some interactions he’d had while running errands. I felt, in that moment, that I was doing a service. I was providing comfort. I felt like his friend on a sleepover, but I also felt like his girlfriend, his lover, and his mother.

“Well,” I said, not sure where to guide the moment, “we did the best we could today. It’s time to say goodnight and try again tomorrow.”

He got under the covers, and I tucked him in. As I bunched the sides of the top layer of his blanket, he smiled at me, and I had a very uncomfortable feeling—I want to cuddle with you—that I instantly suppressed, even though I felt like cuddling would be, of course, the most lulling thing. The desire to do this surprised me. Most of the people I had told about lullabying had been concerned for my safety—”aren’t you afraid these men will want sex?”—but in the moment, I realized I was the one having boundary issues. And I was so unbelievably tired all of a sudden. It was almost midnight. I was falling prey to what felt like a very natural progression of the whole concept of arranged intimacy. I wanted to lay down and go to sleep, but I couldn’t, of course.

Sam, innocent as a lamb, curled up. I brought out my guitar and sat down beside the bed.

The room was quiet, and the lights were all off, except for a dim table lamp. I was exhausted. I began playing. At first I thought I would fall asleep singing. But as I continued, and the music filled the room, I felt more and more comfortable. It was actually happening. Save for that one little blip where I almost cuddled my client, I actually had, all on my own, created a beautiful vocation. I had discovered some bizarre little possibility of life that came quite naturally to me and was beneficial to another human being. When Sam rolled over, clearly lulled, I felt I had professionally arrived.

Lenarsky launched a podcast to document her lullaby escapades.

I felt emboldened enough by this experience to keep trying, and for the next few weeks I continued to experiment and found new clients around the city and beyond. One client commissioned me to write him a song to listen to when he went out of town on business, as he was worried he’d have insomnia in a strange hotel. It was a pleasure to work like this.

Although both men and women were interested, the people who really wanted to make it happen were all of a similar stock — cute, warm white guys in their 30s, creative types, easily touched by emotion, and a couple of them had mothers who had passed away. I never sang for someone who had any lasciviousness behind his or her desire, or worse, any irony. It seemed like I had found the special innocent musical connection I had been looking for. And that’s the way I wanted it, because I was in denial about the fact that lullabying seems (and, it turns out, feels) a lot like therapy and a little like sex work. And that’s where the trouble started.

Everyone I listened to, tucked in, and sang for had placed a deep, overwhelming trust in me, the kind of trust you have for your mother. I was never in danger. What I was, was a person vastly under qualified for this kind of vulnerable, emotional work.

Where was my mother to shake some sense into me? If anything, I needed to be in therapy myself.

I had wanted to have a job where I would feel like I didn’t exist, where I could detach and float through the world unencumbered by reality. Kind of like how people disassociate from traumatic experiences. The reality of the job was the very opposite—I seemed to exist even more, as a very real witness and steward of the hearts and minds of my clients with more intensity than I could have anticipated. I felt like I was doing some type of unspoken emotional work with my clients that would be better handled by a therapist or, again, a mother. And I was far from fit to be either of those things. Where was my mother to shake some sense into me? If anything, I needed to be in therapy myself. I was a stupid, confused singer who felt I belonged a safe distance away from the hearts and minds of others. I belonged on a stage with an orchestra pit serving as a moat to protect myself from the audience and them from me.

I hung up the job after several weeks of wandering through Los Angeles, embarrassed that I had tried but excited that I had gone through with it. Despite the fact that it made me emotionally uncomfortable and confused, I still daydream about the lullabyist. It was such a beautiful idea. An actual dream job.

Previous: Why Gillian Flynn Buys Her Purses from the Liquor Store
Next: Lou Doillon Opens Up About Her Music Career, Growing Up Birkin, and “Desperately Needing Men”