Has Harry ditched his lucious brown curls for a new hue?

One Direction singer Harry Styles teased fans by sharing a snap of a comb full of clumps of bright blue hair on Saturday.

Though his tattooed hand can be seen in the shot, curly-haired Harry decided to leave the owner of the tufts a mystery.

‘Someone did something different with their hair today…,’ he wrote alongside the photo.

But it soon became clear that the brush didn’t belong to the 19-year-old 1D star.

Michael Clifford, 17, from the boys’ support band 5 Seconds Of Summer, debuted a radical new ‘do in a Twitter selfie shortly after.

‘Did you say blueeeeee,’ Michael captioned the picture.

How Harry Styles would look with blue hair (cute!)… 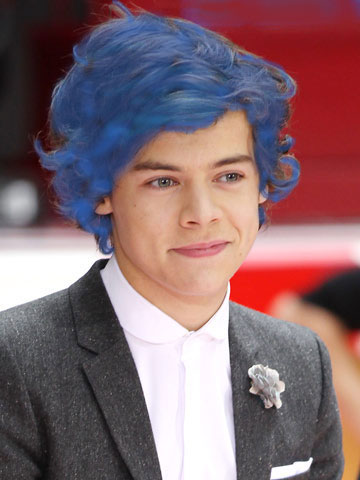 Previous: See Justin Bieber’s VERY Blonde New ‘Do
Next: How All Pink Hair and Makeup Is Cheering Me Up