This article originally appeared in the October 2016 issue of ELLE.

On the winter night seven years ago when Jesse and I met at an East Village bar, I was wearing an enormous vintage pimp-daddy fur over a tiny Stella McCartney tank top kitschily emblazoned with a pouncing scorpion (my zodiac sign) and loose jeans with one leg rolled up (à la mid-’90s LL Cool J) to reveal a retro tube sock. I remember how I felt—awesome, and slightly ridiculous—walking in and being introduced to the tall, cute, casual guy with the great hair, who told me on our second date that, among other things, he was enchanted by the way I dressed. Getting dressed has always been a most delightful game for me, the best way to convey the many things that swirl around inside on a given day—my ambitions, fascinations, unrest; the profound feelings I have for my friends and the earth and music. So when Jesse proposed, I was giddy at the prospect of finding a dress that expressed everything I felt about him, and us.

Which quite obviously was never going to be the archetypal big, white princess gown. I don’t love its connotation of innocence and purity, for starters. I’m a fully formed, complex, 31-year-old woman! I don’t think or aspire to be “pure”—indeed, I don’t know any woman who does. What I wanted was to look sexy—sexier than I’d ever looked before. I wanted my wedding dress to convey that this marriage would be, among many other things, carnal. I wanted it to scream, I’m alive! I love life and this man! And It’s party time. And for it to make Jesse, watching me peacock down that aisle, think, Man, I get to marry her? Forever looks like fun.

I wanted my wedding dress to convey that this marriage would be, among many other things, carnal.

But where in the name of Bob Mackie was I going to find a wedding dress that somehow melded the off-kilter glamour of Gwen Stefani with the balls-to-the-wall lustiness of Rihanna and that, crucially, looked filched from the variety show–era closet of my full-throttle, midriff-showcasing glamour icon, Cher? I dutifully set up appointments at a roster of fancy Manhattan wedding dress boutiques and scoured the vintage scene, but three months before the wedding, I was still dressless and increasingly desperate. 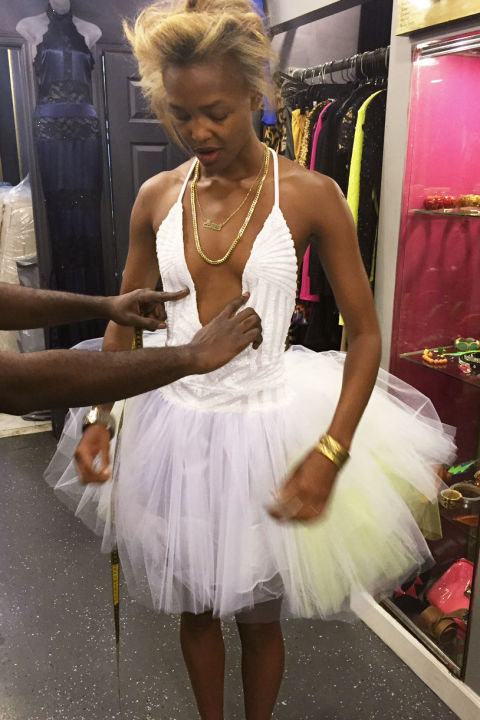 The author’s (original) navel-skimming dip
Courtesy of the subject

Then one Saturday, dejectedly walking down West Eighth Street after hours of hunting, I glanced up at a second-floor shop. There it was, a knockout dress—more like the slutty tutu of a rogue ballerina—in the window of L’Impasse. This, it turns out, is the place to shop if you want to look like a sultry red-carpet Beyoncé, an Ice Capader, or, yes, variety show–era Cher. Four seamstresses stationed in a back office expertly craft every custom order, from slinky gowns to gold-beaded leotards to “illusion” dresses for the actual Nicki Minaj. This was where my dress would come from! I knew it even before the owner and head designer, Abdul Sall, a black Frenchman with the kind of chic accent fashion people have in movies, agreed to make it for me. I presented Sall and his associate, Khaly, with an accordion binder stuffed with inspiration: Nicole Richie in one of her 2010 wedding dresses, a frothy explosion of white Marchesa tulle; Miley Cyrus on her Bangerz tour in a crotch-cleaving bedazzled green leotard; Rihanna in that mind-bendingly transparent Adam Selman dress at the CFDA Awards in 2014. “It’s not that I need my nipples to show,” I explained, “but I do like the idea of transparent accents or panels.”

“Whatever you want,” Sall said. I would soon learn it’s his mantra.

“It’s not that I need my nipples to show,” I explained, “but I do like the idea of transparent accents or panels.”

That first day, we sketched my dress: an abundant tutu with layers of ultrastiff tulle in the back that jutted straight out at a 90-degree angle and feathers fastened throughout, because why not? The bodice would be a bustier. No—a leotard! “Can you make it out of a sequined spandex-y material so that it’s stretchy enough for me to dance all night?” I asked. “And rhinestones? I want rhinestones!”

“Whatever you want,” Sall said.

The first fitting, a month later, was a nightmare. They’d produced exactly what I’d asked for. But what I’d asked for turned out to be cutesy, multitiered, and Strawberry Shortcake–ish. Luckily, for a $200 kill fee, the team agreed to start over completely.

To our next meeting, I brought magazine tear sheets of exact cuts and shapes. After 10 fittings—tweaking and adding, adding and tweaking—the dress was nearly finished. Finally, it was time to bring in my mom.

Though my mother and I are inseparable, our tastes are wildly different. A copy editor at the New Yorker for 24 years, she sleeps with (and zealously consults) a trusty 12-pound dictionary by her bed; fashionwise, her vibe is decidedly Downton Abbey. Remarkably, though, she’s always appreciated my style, in that it is wholly my own. But when I’d let her peek at my inspiration folder a few weeks earlier, she was horrified, angered, deeply despairing. “You can’t look like a tawdry tramp at your own wedding,” she said. “It’s a sacred day. And I won’t come if you don’t treat it like one.” Per the standard mother-daughter script, I shot back that it wasn’t her wedding, it was mine. And why would I look prim and proper on my wedding day—the occasion on which I felt I most needed to look like myself? The next day, she e-mailed me links of Kate Middleton and Grace Kelly in frilly white dresses.

#tbt to piles of fun!! #megabull

At L’Impasse, she sat outside the fitting room in the kind of ankle-skimming frock one might wear to high tea while I shimmied into my dress. It was sparkly and sequined, with a voluminous, thigh-high tulle tutu and a truly plunging halter. When I stepped out, the store seemed dramatically still. Then, to my surprise: “It’s not what I would have chosen…but I do suppose it’s you,” she said. “And it does have to be you.” And then, “But please, can we stitch up that neckline just a bit?” (We compromised: Ultimately, the dip was about three inches north of J.Lo’s dizzying green Versace plunge.)

I couldn’t help but think something was missing. The dress was so…white. “Does neon-green tulle even exist?” I asked the team.

It does. I didn’t dare look over at my mom. “Can you make me a neon-green veil?” Guess what Sall said?

Nashville, Tennessee. Saturday, September 19, 2015. I’m a vision of sequins and skin, an Ecto Cooler–green veil trailing radically behind me, as I walk—shaking, smiling, light-headed—down the exceptionally long aisle that is my mother-in-law’s sprawling, flower-strewn backyard. I feel like I can dance all night, and I never, ever want to take off this dress. I’m laughing as I approach Jesse—who comes obnoxiously close to upstaging me in a hot-turquoise bespoke suit and his dad’s leopard-print shoes—and his lips are splayed in a gigantic grin I didn’t know he had. Wow! he mouths, his eyes brighter than a thousand glittery gowns. I like to think that, at the sight of me, he heard lilting steel drums, that I reminded him of all the luscious, strange, exuberant things to come. And of course, a little of Cher.

Have thoughts? We want to hear from you. Contact us at elleletters@hearst.com.

Previous: Caroline Issa on the Decision That Turned Her Into a Street Style Star
Next: We’re All One Step Closer to Having Lips Like Hailey Baldwin