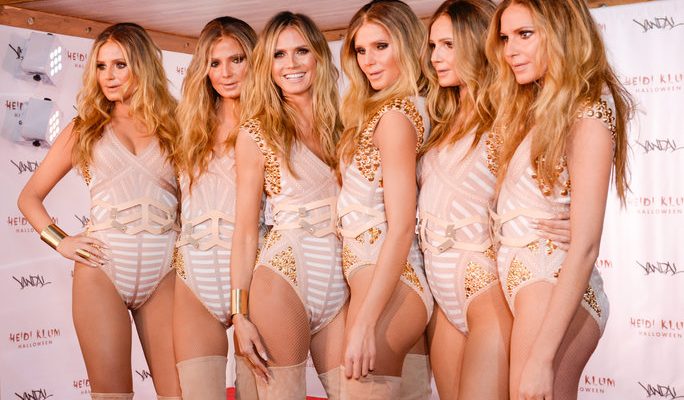 Heidi Klum essentially went as a glam version of herself for Halloween, so how did her costume take a whopping 11 hours to put together on Oct. 31? It turns out creating five Heidi Klum clones takes a lot more work than you’d think.

“It took a few months, so we started this summer,” Klum told InStyle at the launch of her new swimwear line, Heidi Klum Swim. “Basically Mike Marino—he is the main artist—he did a mold of my face, and then he had to mold all of the other girls’ faces. And then he basically had to put my face on their mold, which is super tricky to do. It had never been done before like that.”
“Then the wigs had to be made and the wigmaker came. They made sure that the color is the same like my color and then the length. It has to be cut because you can’t buy a wig like that in a store. So it’s tricky,” she said.

After months of preparation, the big day took 11 hours of work for the five women who signed up to become one of Heidi’s “sextuplets.” But for the supermodel, the day-of preparation was easy as pie. “For me, it was an hour and a half with chatting.”

Perhaps after last year’s incredible Jessica Rabbit transformation—prosthetics and all—Klum was ready for a low-key night, and she doesn’t care that it wasn’t an all-around hit.

“Really, the idea came about when I do interviews and people always say, ‘How do you do it all?’ And I kind of thought to myself, ‘Yeah, I have to juggle so many things. I wish I could clone myself. And then, wait a minute, I can. For Halloween I’m going to clone myself,’” she told InStyle. “I always try to come up with something innovative and something new and something that I personally haven’t seen before, and I had never seen anyone being cloned before.”

“When you do something that is different it’s always a hit and miss, and some people were like, ‘We love her when she has all the stuff put on herself and everything.’ It’s just different. You cannot always please everyone. I actually really loved it. I thought it was really out there.”

You could never accuse this star of sticking to the mold—pun intended.

Previous: Win with GLAMOUR and Colette by Colette Hayman and could be shopping up a storm at one of the hottest fashion destinations
Next: I Broke Up With the Color Black All These Years