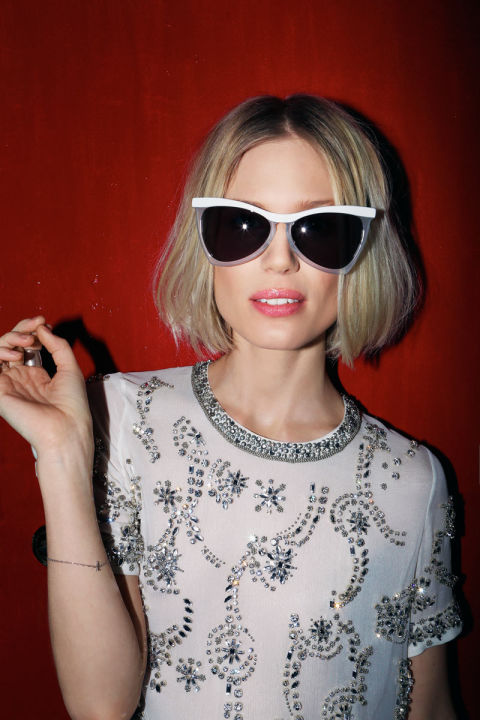 After a McDonalds executive invited indie-rock outfit Ex Cops to play at South by Southwest in exchange for exposure and food, but no compensation, band member Brian Harding published the email on Facebook. When the post went viral, the multibillion corporation changed its tune, and agreed to pay all musical acts who perform in their showcase during this year’s festival. The following profile, which appeared in the May 2013 issue of ELLE, highlights the gumption and ambition of its lead singer, Amalie Bruun. Read on:

Sipping hot tea through a straw, her narrow fingers clasped firmly around a flimsy Styrofoam cup, Denmark-born, Brooklyn-based musician Amalie Bruun took in the scene before a recent appearance at the Manhattan music landmark Mercury Lounge. It was about 15 minutes before she was scheduled to perform, and the showgoers consisted of her nerve-addled manager, Josh; a long lost friend; and a few scruffy regulars. The place was dead, but Bruun didn’t seem worried. Worried is most definitely not her style. And sure enough, by the time the singer, clad in a loose gray T-shirt and cropped leather pants, took to the stage—after checking in with her three-man band and murmuring a few words to the audience, she had calmly launched into a series of percussion-laced lullabies—patrons had begun to feel her pull, filtering through hinged saloon doors into the foggy back room. Bruun’s vaulting voice oscillated from hiccupy folk choruses to glacial oooh’s and aaah’s; her hands thumped a tambourine with staccato precision. And when she launched into “Crush,” a campy love song that teasingly starts, “Oh no, what’s the story?” the crowd, by then triple in size, was fully in her thrall, mouthing the lyrics, their eyes trained on Bruun.

“I’ve gone through a lot of personal growth these past six months,” the 28-year-old says a few days later, when we meet for a tour of her Brooklyn neighborhood of Greenpoint. During that whirlwind period, she gave up drinking and turned out two albums: True Hallucinations, the debut from Ex Cops, her critically lauded alt-pop band with boyfriend Brian Harding; and an as-yet- unnamed solo effort, which will be out later this month. Despite her rising profile (Spin named Ex Cops one of its best new artists last year; Pitchfork called Hallucinations “a triumph of focus and discipline”), Bruun has stayed true to her unwavering style—a look that has invited plenty of fashion-world attention—which she culls from hand-me-downs, thrift-store finds, and the collections of designer friends Camilla Stærk and Erin Fetherston. “I have my gear,” she says, staring at a crescent of skin peeking out from the worn-to-perfection Acne jeans she picked up in Stockholm nearly a decade ago. “And I feel most myself when I wear it.”

Bruun’s sublet offers further insight into her sometimes eccentric sensibilities. After cohabiting in her East Village loft with Harding for four months (he moved in during Hurricane Sandy and never left), the couple relocated in February to artist-packed Greenpoint, where her favorite spot, Franklin Street, is dotted with rustic gastropubs and closet-size boutiques full of locally made wares. A French artist couple had recently vacated an ultra­narrow ground-floor apartment in a Nantucket red exposed-brick building, leaving in their wake a collection of oddities—including a wall installation of animal figurines, old origami creations, and a singular 10 of diamonds playing card—which Bruun and Harding have not disturbed. “A lot of furniture is theirs, but we mixed in our own stuff to make it feel like home,” she says. An extensive library of works by Camus, Hemingway, and Joyce was curated by both sets of tenants. Even the refrigerator door reflects the taste of the home’s old and new guards: The top half, a space now belonging to Harding and Bruun, includes lazily scrawled love notes (“U have a beautiful voice. xo B,” one reads), while the bottom half, littered with personal photos and newspaper clippings, is still at the mercy of its worldly curators-at-large.

The first stop on a Bruun-led Brooklyn adventure is Greenpoint boutique Old Hollywood, to peruse handmade jewelry. In a peekaboo Alexander Wang top and cuffed boyfriend jeans, Bruun shops with the decisiveness of an editor, pausing only momentarily to inspect the wash of a pair of pants or to consider a cropped mohair sweater adorned with candy-dot-size pearls. “This one’s cute,” she says, thumbing a chambray baby-doll, “but I’d wear it with chunky shoes.” The formula is just this simple: Rough up prettier finds with go-to pieces, including a fur-trimmed coat nabbed from her equally stylish mom (“I love it because it’s grunge, so it lives on for decades and decades,” she says), thrifted varsity jackets, a blatantly hideous neon pom-pom hat purchased during a frigid outing to Times Square, and a skull ring from C’est Magnifique that, in a former life, was an engagement ring from an ex.

Asked what inspires her style, Bruun cites Betty Blue, the 1986 French film about an unstable woman who simultaneously craves everything and nothing. She also references ’90s icons Courtney Love, Kurt Cobain, the Spice Girls, and actresses she calls “inconvenient beauties,” like the hard-edged but “absolutely stunning” Winona Ryder. “That style and those years were really important to me. Those were the movies I watched and loved.”

The daughter of a rocker dad who once opened for Bob Dylan—she’d borrow his leather jackets and Harley-Davidson boots—and a psychologist mother, Bruun grew up in Copenhagen, where she split her time between ballet lessons and learning to play piano and guitar. “My friend actually once said, ‘You’re a singer, you write songs, your mom’s a shrink, and your dad’s a musician—you must be absolutely out of your mind,’ ” she says. “It’s a cocktail of insanity.” At 15, Bruun was noticed on the street by a scout from 2pm (the Scandinavian agency that represents Abbey Lee Kershaw and Anja Rubik), but being a pretty face was never going to be enough for her. In 2006, she released an album cowritten with her father on the Danish label Kick Music. Two years later, she won the International Award from the New York Songwriters Circle—a showcase that has nurtured talents including Norah Jones, Lana del Rey, and Vanessa Carlton—and moved to the U.S. She toured with an all-girl Kinks tribute band, the Minks, and released the solo EP Branches on indie label EasyTiger Records. Then, in 2010, she learned that Chanel was seeking a “Brigitte Bardot Euro-woman” musician—and that Martin Scorsese was doing the casting.

“We just talked about music,” she says of meeting the legendary director, who noted Bruun’s resemblance to rock progeny Theodora Richards and gave her the role of French heartthrob Gaspard Ulliel’s love interest in the 60-second spot for Chanel Bleu De Chanel fragrance. (The ad has since racked up 2 million YouTube hits.) “There was a fitting on my birthday, and I got to wear, like, 20 different vintage Chanel gowns from the ’30s,” she says. “It was the best birthday ever.”

Bruun may look beguiling in Chanel, but both her style and her disposition tend toward the unadorned—a guiding principle that also applies to her music. “I only want to wear things that are necessary. I only want to sing notes that are necessary,” she explains. “It’s not indifference; I’m very excited about things.” Far from the eager-to-please ingenue, she has the guardedness of a veteran. “I don’t get flattered very easily.” She pauses before adding, “I think that’s a dangerous thing.”

Liked this story? Get it first when you subscribe to ELLE magazine.

Previous: Amanda Fortini Asks: Whatever Happened to Sexy?
Next: She’s a Woman