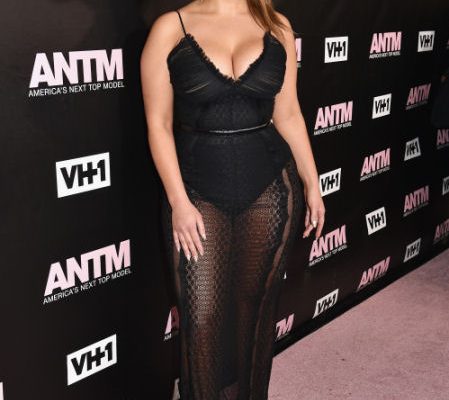 Maybe Ashley Graham is  the most well-known plus-size model in the fashion industry, especially since Graham, an America’s Next Top Model judge, has put herself out there as an activist for plus-size women. Ashley has also become a social media warrior against internet trolls and body shamers seeking to belittle women who don’t conform to the body image Hollywood has established for women. That being said, there are times when Ashley may be just a little too visible. Take her polka dot dress, for instance. While Graham’s underwear, which is very visible beneath the dress, is certainly sexy and flattering, her polka dotted dress is something for rare tastes.

Ashley Graham Stops Traffic In See-Through Dress
Ashley Graham was spotted in the polka dotted see-through dress on Friday in New York City, and, although the America’s Next Top Model judge wasn’t completely nude beneath the dress, her black body suit hugged her curves in all the right places. Ashley accented the dress with a sparkling diamond necklace, matching earrings, and cream-colored Christian Louboutin pumps.

Ms. Graham has had a prosperous year, beginning with her launch to fame on one of four covers for Sports Illustrated‘s swimsuit cover. Following up that achievement and building upon the praise she received for modeling for that cover, Graham launched her own Nordstrom lingerie line for plus-size women. From there, the opportunities presented to Ashley were limitless: Graham has modeled for Lane Bryant, posed for Dressbarn’s More Than a Name ad campaign, and just recently became the subject of a new plus-size Barbie doll.

“I [used to] be told, ‘You’re not a cover model,’” said Graham, who will now be serving as an America’s Next Top Model judge. “I thought to myself, ‘I’ll just do catalog.’ And because I held onto that for so long I just stopped living that dream.”

After some time, Graham says she stopped living the life other people had chosen for her and forced the world to accept her as the person she wanted to be. After that, Ashley says her career really began to develop.

While Ashley Graham is making a name for herself as an advocate for plus-size women and in her own modeling career, the Washington Post discovered that her magazine covers have come under fire by her own fans. The public isn’t criticizing Graham herself but the magazines for using photo editing to make Ashley appear slimmer. The first time was for Graham’s Maxim cover, though none of the magazines involved have admitted to using any kind of photo editing on Graham’s covers.

The latest incident involves Ashley’s cover for British Vogue. This magazine cover is important for two reasons. First, Ashley will be the first plus-size model to be featured on the magazine’s cover, and that, in itself, is a remarkable achievement.

While Shulman says Ashley’s beauty is still fully experienced in the photos, the shoot had been rushed at the last minute, because fashion designers were not interested in attaching their names to Graham’s feature. In her letter, Shulman bashes those fashion houses who “flatly refused” to donate clothes for Graham’s photos.

There was one exception.

“We are all very grateful to the people at Coach who, under the creative direction of Stuart Vevers, moved speedily to provide clothes for us that had to come from outside their sample range,” Shulman wrote. “They were enthusiastic about dressing a woman who is not a standard model, but sadly there were other houses that flatly refused to lend us their clothes.”

While fashion houses may be reluctant to change with the times and give a more accepting view of plus-size women, that won’t stop Ashley Graham from being proud of her body. In fact the model, fashion designer, and America’s Next Top Model judge says she loves going as nude as possible, embracing the see-through clothing phase.

“I personally love to show off everything that’s going off underneath,” says Ashley Graham. “It’s not an everyday look, but it’s definitely a special occasion. See-through everything, lace everything.”

Previous: “There is a certain mystique that is reflected throughout the palette, inspired by the increasing need for people everywhere to create an individual imprint.”
Next: The word cheese can actually make your smile look photogenic