We are done! We got through New York, sped off to London, ended up in Milan and now finally see the latest in Fashion Weeks come to a close in Paris. The numbers of fall 2017 fashion trends have grown in this time and changed only slightly in between the different cities. Some of the top Paris Fashion Week fall 2017 fashion trends are recurring, while we also see breakout trends that are enough to turn our heads. 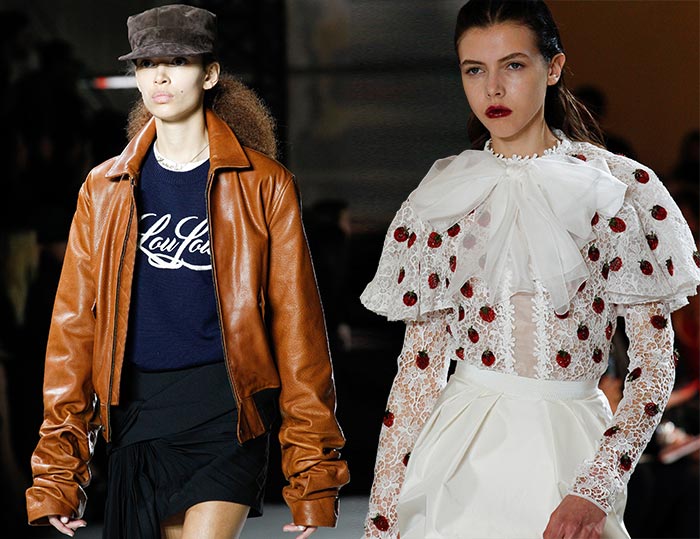 Yes, there is so much to love about Paris Fashion Week especially, where fashion truly is inspired by the most interesting of pieces. There is enough fashion love in Paris to get us through to the next bit of Fashion Weeks, this time for the spring season of 2018. It will be a hard wait, especially after finding so many amazing items on the current catwalks.

Gorgeous fashion trends for fall 2017 have appeared on the Paris stage and we would like to expound on the top 15 that were spotted. Lightweight linens, floral dresses and intriguing vinyl all seem to appear among the best of collections.

The Paris Fashion Week fall 2017 fashion trends to look out for include:

The most shocking of all Paris Fashion Week trends for fall 2017 is indeed the absolutely glossy vinyl used all over the collections presented. From coats to suiting, we see the often hated material mark its place on stage; matching dresses and boots at Saint Laurent, single piece designs at Wanda Nylon, coats at Chloe, pantsuits at Lanvin, different colors at Vanessa Seward, etc.

It is generally a strange look and probably better for the fall rather than the spring. Many fashion lovers have fingers crossed that this one won’t be lasting as long as some of the other trends have. 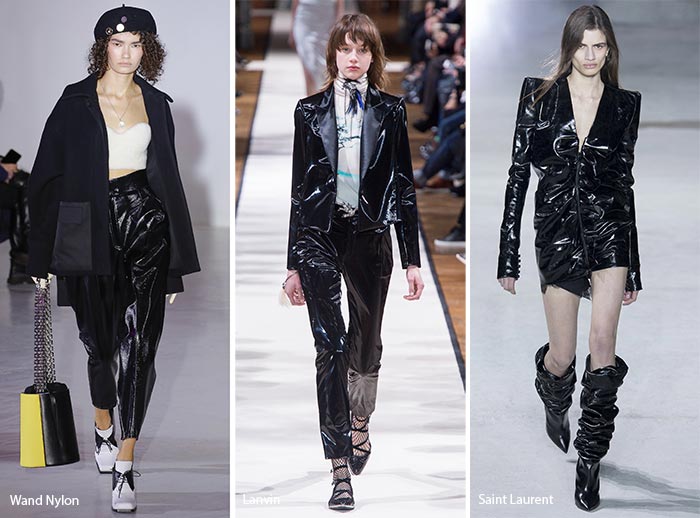 Jackets, coveralls, pants and more appear in the denim material that we all have in our closets. You might be laughing at seeing this trend again for fall 2017, but French designers are hoping you will want to grab some haute denim.

Dior loved those boiler suits and work jackets, including that which a plumber wears… seriously. Louis Vuitton played on denim and shearling with its signature miniskirts, while Dries Van Noten brought in mixed print coats and patchwork jeans. It was certainly an interesting mix of played up denim that you can enjoy for the fall of 2017. 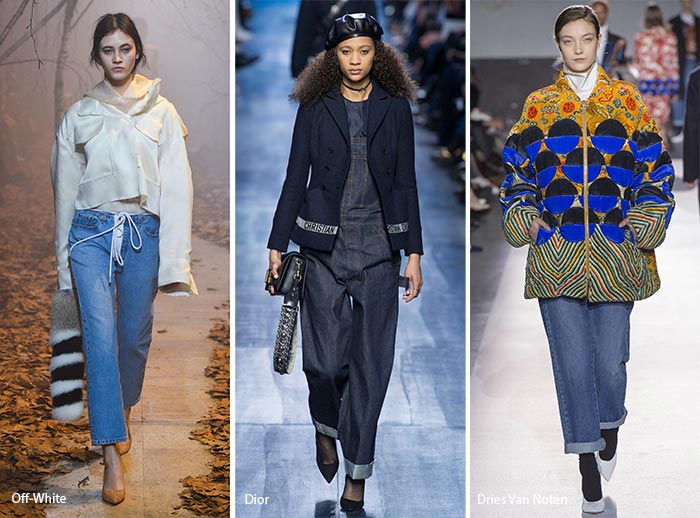 Furry things have always been a favorite for us humans, whether they be real fur or fake. Shearling thus easily makes this list once again as a top fall 2017 fashion trend for the year, appearing aplenty, with denim jackets at Louis Vuitton, on funky vinyl dresses at Saint Laurent, and gorgeous long coats spotted at Balmain.

It is all about adding in the warmth, meaning that most designers have incorporated the fall trend easily enough, including Chloe and Alexander McQueen. 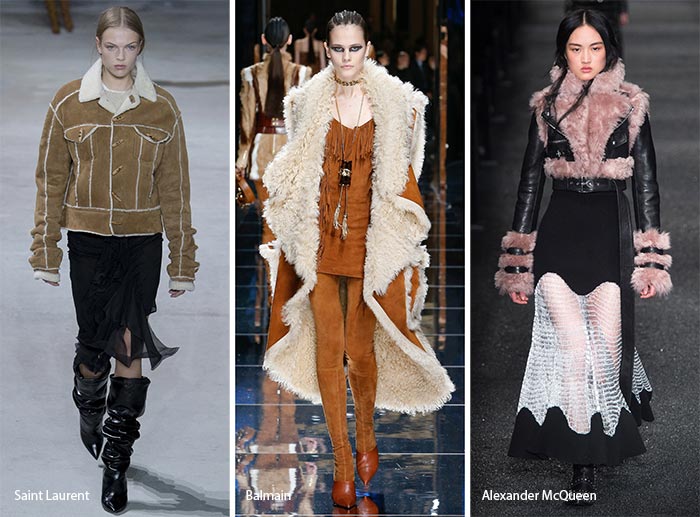 Generally appearing on coats, the black leather look was in as always on the Paris Fashion Week. Instead of the little black dress, it’s all about the big leather jackets now. Long and short, with matching skirts and tops or plain enveloping the body on its own. Big and black and leather. You simply cannot go wrong with it.

The rather pointy shoulder on the coat seen at Balenciaga certainly is inspiring, especially paired with form fitting black leather pants. Akris, Stella McCartney, Alexander McQueen, etc… so many to choose from. 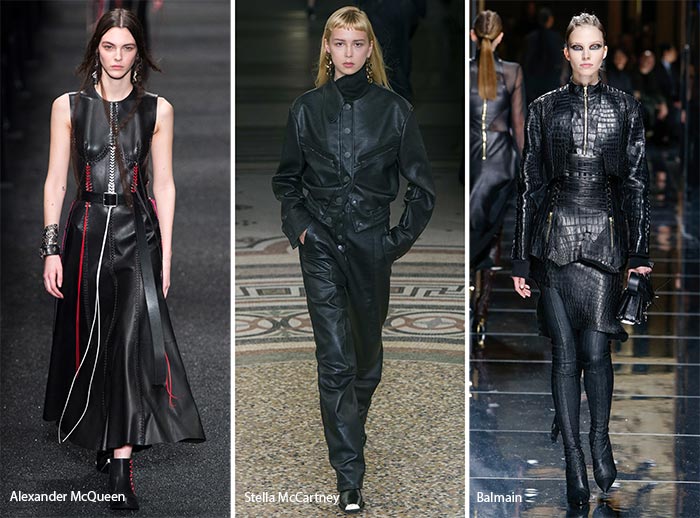 We have been seeing boxy looks for too long now and while some designers are still enjoying the aftereffects of bringing it in, we have quite a few turning away from the lackluster inspirations and bringing back the feminine body with absolute tailoring projects.

The past year was full of the pantsuits so perhaps that is where the inspiration to cinch in the waists and define the legs more came back in; perhaps it was just the total lack of differentiating between the masculine and feminine.

Fall 2017 is bent on showing off traditional menswear made for a woman’s body. Plain and simple. From Stella McCartney’s British tweed to the relaxed power suits of Celine and Isabel Marant, there was everything to love in this Paris Fashion Week fall 2017 fashion trend. 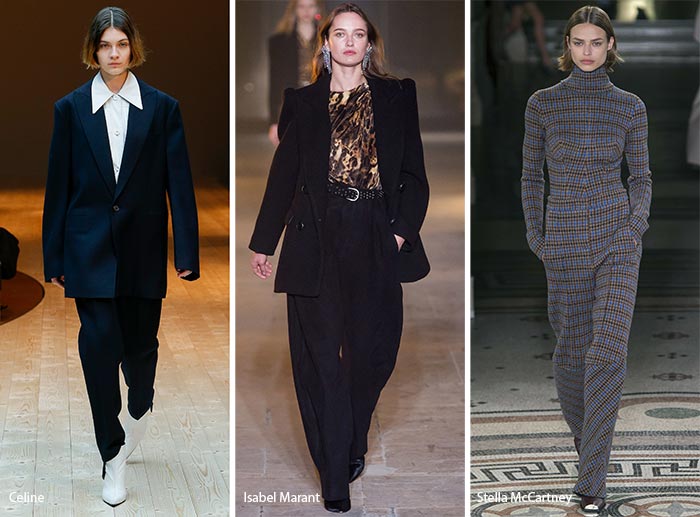 The waist looks thinner when shoulders are accentuated and that is exactly what the designers on the Paris Fashion Week were going for with this fall 2017 fashion trend. Mugler’s form fitting pantsuit definitely combines sexy with power, while Alexander McQueen’s slouchier creations put an emphasis on the “shoulders back” ideal.

It is a trend that has been around for a short time now but will probably keep its place, especially with those shoulder pads on everything. Totally ‘80s and ‘90s! 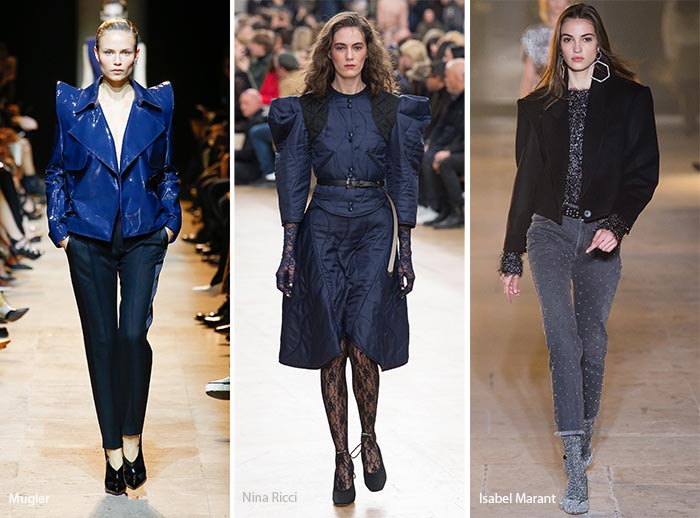 Longer or shoulder, the midi skirts are in and generally span to around calf length, if not a touch lower still. They come in the whimsical looks seen at Christian Dior, the studded blacks of Alexander McQueen, or the slashed styles of Sacai.

They appear all over the runway and within nearly every collection. Midi skirts are a top fall 2017 trend to look into and you would do well to stock up. Plus, they are certainly warmer than putting on a mini, that’s for sure. 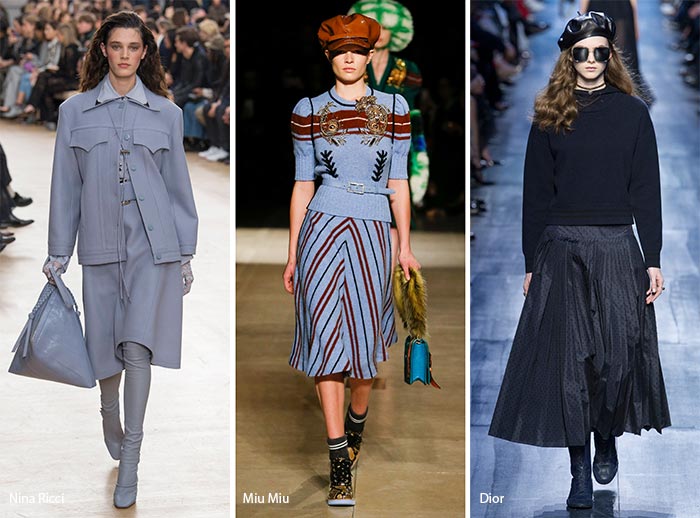 Long coats or short coats, the puffers are in and look positively fabulous when paired with a more summer-worthy outfit underneath, as spotted on the Fenty x Puma by Rihanna runway show.

It is the favorite piece to cover up with on the streets and Rihanna, among many other designers, has only amped up its fashion statement, making the oversized or not-so-oversized pieces the perfect item to pick up on the way home. Totally ‘90s in this case! 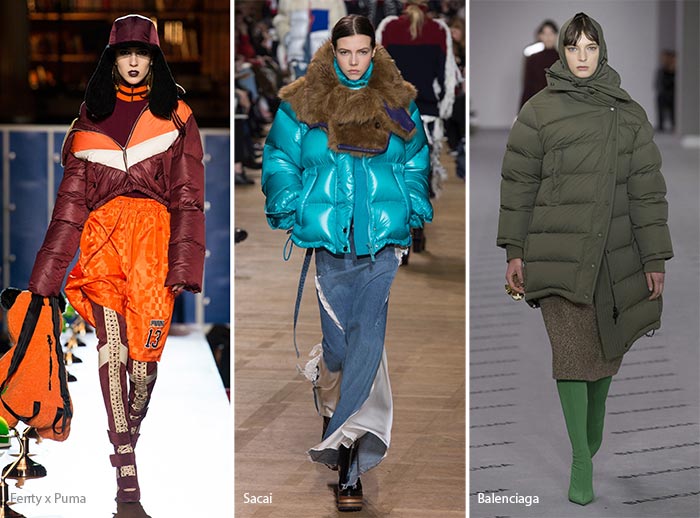 It is a top trend everywhere but does not appear as much on the runways as it does in Paris. Capes are in. You can enjoy the fashionable capes that are reminiscent of old movies and totally feel modern now. You can also play at being in an olden film. That is your prerogative. But from Alexis Mabille to Koche and Chloe, Liselore Frowijn to Veronique Branquinho, know that playing on the cape trend is quite in style. Go crazy with it. 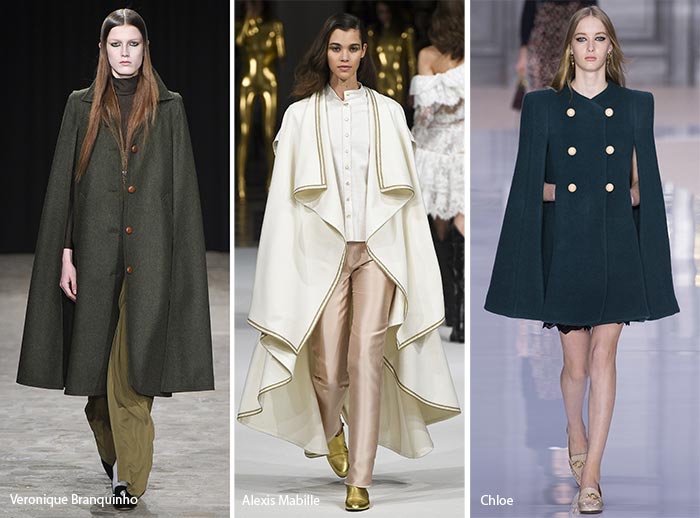 Softer silhouettes were a common sight on the Paris runways and served to create their own rather lovely fall 2017 fashion trend. Tulle and soft fabrics, pastel colors and lots of bows, frills and lace made up this particularly princess-like fall trend, and it was lovely beyond belief.

The contrast with the strong black colors also present on stage was quite noticeable and the generally spring effects of the designs looked rather lovely for the cooler seasons as well. Though wearing such light clothing might be a chilly endeavor. 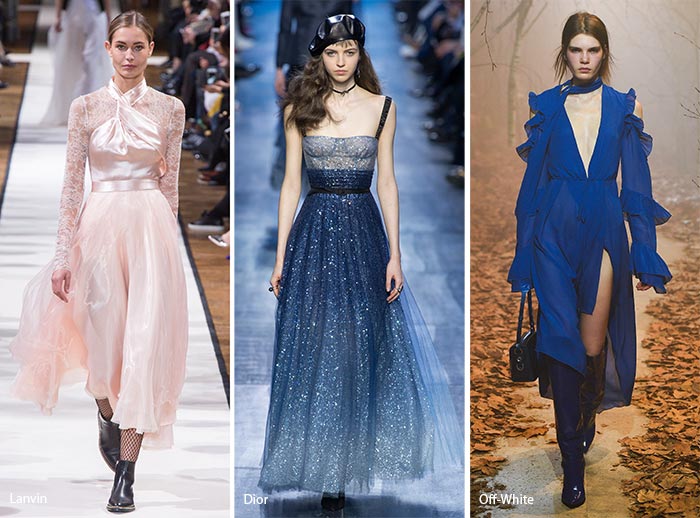 Sometimes it is the whole coat, sometimes just the arm of a dress, sometimes mixed with leather and others with gingham… we see arms in furry styles all over the runway, whether elegant as on Nina Ricci or sweetly ladylike as per Carven, strong and sexy as per Haider Ackermann, or plain lovely according to Dries Van Noten. You can keep warm and look like you have bear arms all at once, while still maintaining a fashion sense.

It was all shiny and futuristic appearing and very much something to invest in since it looks like silver is here to stay a while, even if it is not at the very top of the fall 2017 fashion trends reports. Be ready to give off your shine ladies. 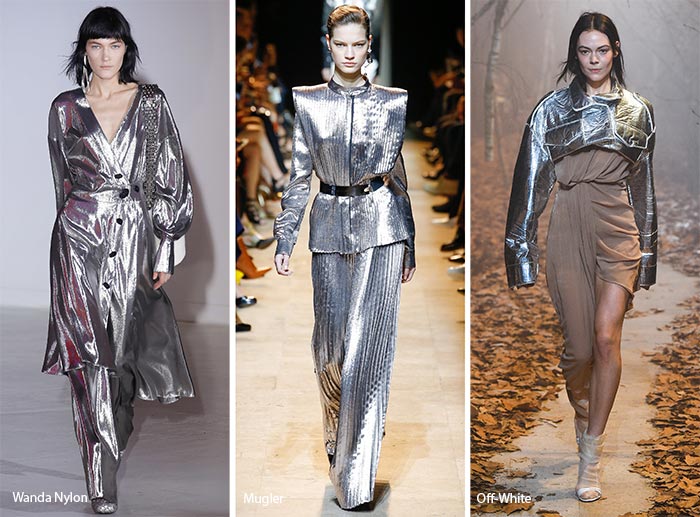 Thin stripes, thick stripes, double or shaded in… pinstripes are a huge trend for the fall of 2017 and come on pants, shirts, dresses and more. Melitta Baumeister brought in a gorgeous black and gray design over leggings, while Issey Miyake went for blue pinstripes in darker shades on matching culottes and hooded shirt style coats.

Acne Studios decided to mix and match between whites and blues, with trousers, long shirts and shorter jackets coming into play. No matter how you wear it, pinstripes are in. 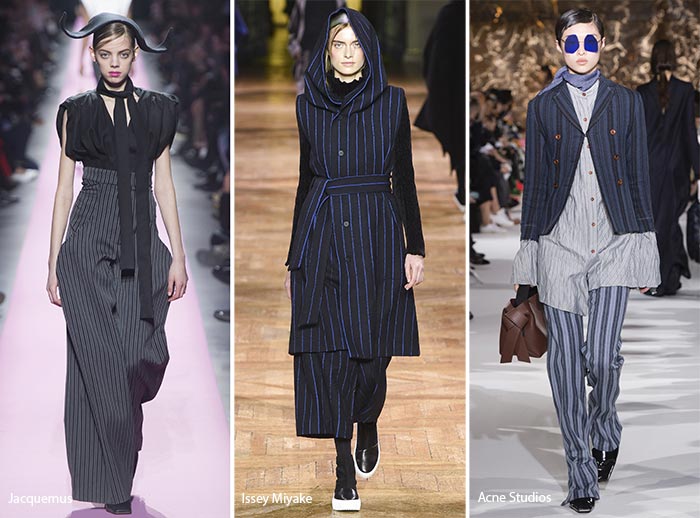 Paris is known for having rather creative milliners, but the number of really strange looking hats on the runway makes for a trend praise. It may not be practical to wear these pieces but they certainly are a head-turner, if not always in a good way.

Having a handbag on your head is definitely a sign that something is pretty off with you, while giant white spikes like the rays of the run as per Vivienne Westwood would give anyone pause before approaching you. We can go for a Saint Laurent beret though; an Undercover Papal hat look, however, is probably not going to sell very well. 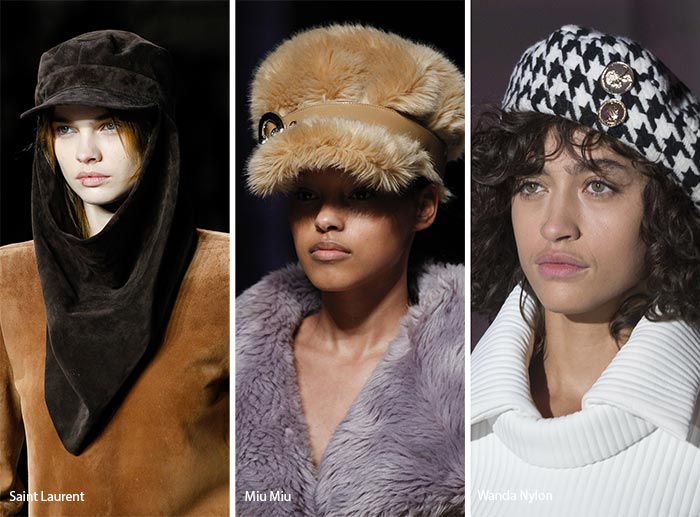 Yep, we are finishing off with this trend that Paris has been pushing down our throats for a while now. Bodies are bare underneath and it is all about strength in vulnerability. We see whole bodies bare under chiffon long-sleeved midi dresses at Lanvin, while Alexander McQueen takes the gothic, the punk, the rocker and the chic and gives nipple baring corsets to the ladies.

As for Balmain, it is the chest that is clearly seen under black chiffon, while the waist down it gets beautifully colorful and utterly sexy in another way. No matter what though, the bared nipples, either fully or somewhat, are still in. Perhaps it will go away when everyone starts to actually free the nipple? 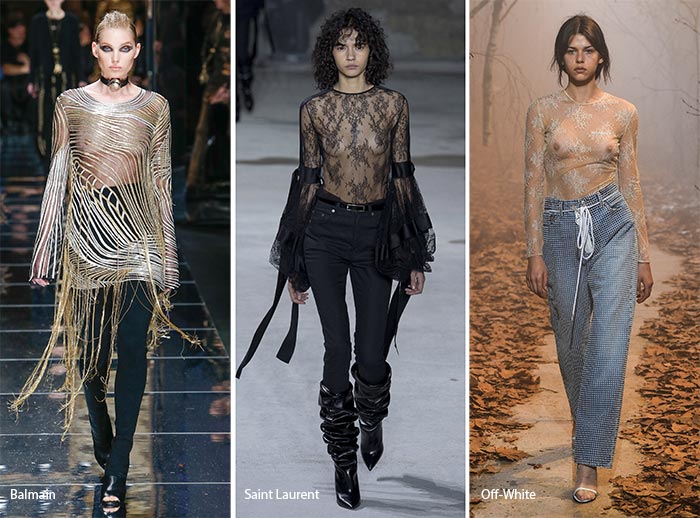